Earlier this year, our platform was buzzing with news of the second edition of the Fashionomics Africa sustainability contest. We celebrated the three brands whose sustainability flair proved to be a notch above the rest. As we just launched the third edition of the contest, we are proud of the many milestones that these brands have reached. As such, it is only befitting that we take some time to reflect on the journeys of our three 2022, Fashionomics Africa Contest finalists!

The Three Finalists of the Fashionomics Africa Contest’s second edition

Lohije, Diakwu Cloth and Reform Studio were the three brands that made it to the finals of the Fashionomics Africa contest in early 2022. The ultimate winner, Lohije, is a Nigerian premium brand focused on crafting garments using conscious design processes and materials that celebrate African culture, nature, local crafts and artisans. Diakwu Cloth, the first runner up, processes waste collected from industry generators, and up-cycles it into an entirely new fabric called the ‘Diakwu Cloth’. The second runner up, Reform Studio, is an Egyptian-based brand which manufactures bags from plastex—an upcycled material invented by the designers, using discarded plastic bags and cotton threads. All three finalists received award packages, complete with financial support and business development services, courtesy of the Fashionomics Africa team in collaboration with its partners for the contest—Parsons School of Design, the United Nations Environment Program (UNEP), Ellen MacArthur Foundation (EMF) and BPCM. The award packages received by the three brands were geared towards enabling the brands to scale their operations and refine their business models.

As a winner of the contest, Lohije received a cash prize of 3,000 USD, a Fashionomics Africa certificate, and access to a network of seasoned industry experts and media insiders. With the grant, Lohije bought new machinery to increase its production; an overlocking machine, an industrial sewing machine, and a bigger generator to power all their machines. Thanks to the prize money, the brand also managed to move to a much bigger space which accommodates its new equipment and provides a better working environment for its team. 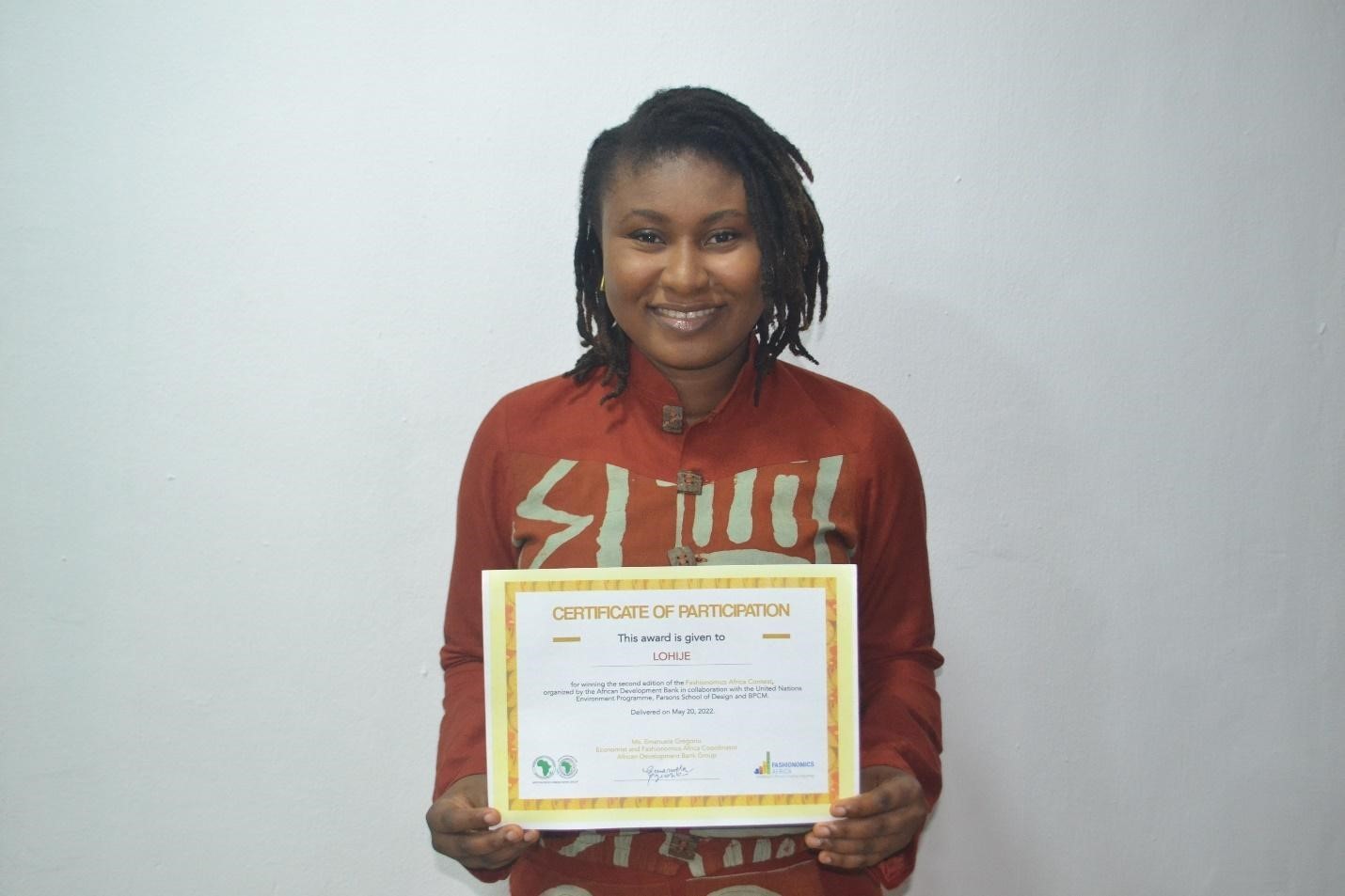 Complimentary to the above, Lohije also enjoyed publicity privileges through taking part in online events organized by Fashionomics Africa, and having their interview published on the Fashionomics Africa platform. In May this year, Lohije attended the Anoumabo Urban Music Festival as a panelist, and had the opportunity to share key sustainability insights.

As part of its winning benefits, Lohije enjoys exclusive access to United Nations Environment Program’s up-to-date expert network, and the exposure of being promoted through the organization’s newsletter database. The Nigerian brand also benefited from bi-lateral, one-to-one training sessions with UNEP fashion and textile experts, where the brand received support on; eco-innovation methodologies, resources, and materials on subjects related to fashion and textile sustainability. In line with strengthening the brand’s business angle, Lohije participated in three online workshop sessions delivered by BPCM. The focus of the sessions was business communication strategy.

The runners up, Diakwu Cloth and Reform Studio, both received cash prizes of 1,500 USD, a Fashionomics Africa Certificate and a branding kit consisting of; a new logo, color palette, recommended fonts, letterhead, business card, and email signature. The two brands were also beneficiaries of the BPCM online workshop, to strengthen their brands’ business communication strategies. Using the grant money, Diakwu Cloth managed to finance its rent for a new weaving studio in Okene, Nigeria and expand its team by hiring three new weavers and a trainee. Reform Studio was able to fund the launch of a new collection in which they manipulated their fabric in a new and innovative way, to produce unique products.

Participation in the Ellen MacArthur Foundation: From Linear to Circular program (Africa)

All three finalists of the Fashionomics Africa contest were awarded slots to take part in the Ellen MacArthur Foundation “From Linear to Circular” Workshop. The program was an exclusive face-to-face workshop which took place from the 11th to the 15th October 2022 in Kigali, Rwanda. Over the four days, participants were equipped with knowledge required to help them play a part in the acceleration to a circular economy in Africa. This was achieved through a mix of in-depth exploration of the concept of the circular economy, participating in expert-run sessions on the practical application of the circular economy, site visits and networking with circular economy experts and practitioners.

The Fashionomics Africa contest finalists found the sessions to be thought provoking, prompting them to consider the numerous avenues that can be explored in achieving a sustainable and circular economy in Africa.

“We learned so much from each other and went away richer and more determined to continue to improve on circular systems designs for the good of our planet,” recounts Ije, the founder of Diakwu Cloth. 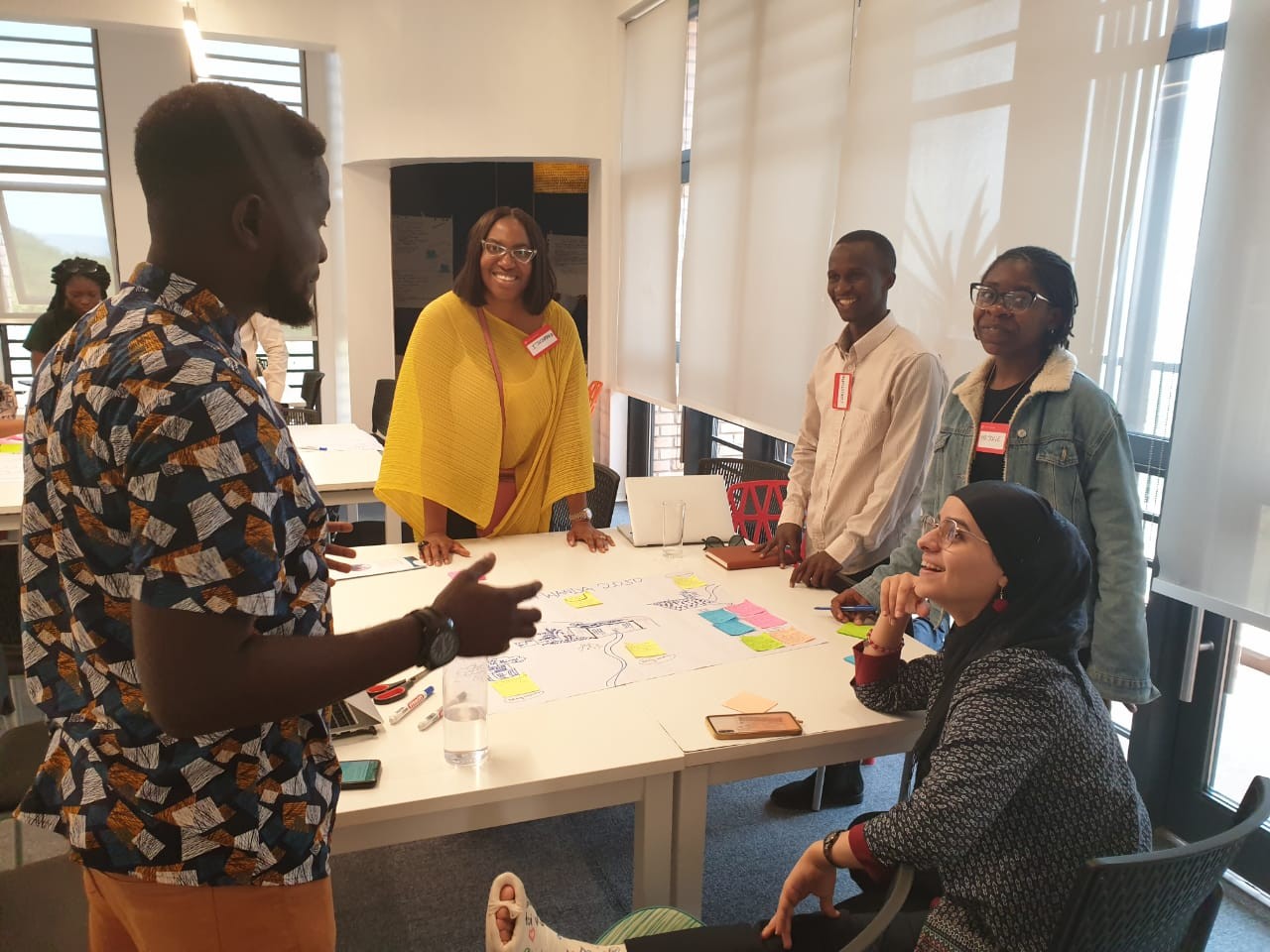 Diakwu Cloth team during the workshop in Kigali

Gift, the founder of Lohije also shared similar sentiments, indicating how she is grateful for the experience.

“The best part for me was the very interactive sessions which made for easy networking with team members. I got to learn about what the Circular Economy is and how it is different from sustainability,” says Gift.

Overall, the entire journey for the Fashionomics Africa contest finalists has been nothing short of transformative. It gave the brands an appreciation of the significance of mentorship, exposure and having access to valuable networks. In addition to the monetary prizes, the value of winning the contest was in the knowledge, exposure and provision of capacity building which spoke to the needs of the brands.

Seeing the contest evolve has been an absolute pleasure for the Fashionomics Africa team. Consequently, we are very excited about the third edition of the Fashionomics Africa competition, and are confident that it will attract another powerful round of innovators who will change the dynamics of the circular economy for Africa’s fashion industry.  In more exciting news, the cash prize for the contest has been set at 10,000 USD, and prospective applicants have a chance to win it by applying between before the 18th of January 2023. Applicants must own sustainable fashion businesses operating in the textile, apparel and accessories industries, and be between the ages of 18 and 35. In accordance with the eligibility criteria, the odds of winning are higher for brands that demonstrate prowess in combining ingenuity, and sustainable innovation, in their sourcing, design or production processes.

If you own a sustainable fashion brand and think this competition is for you, visit this page for a full set of contest rules and application instructions.